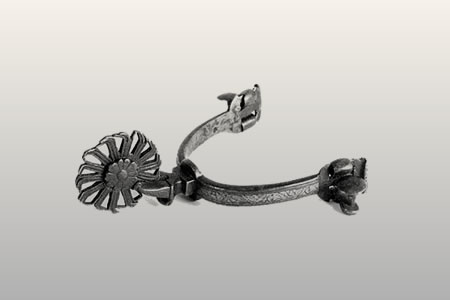 On this property, circa. 1930, a young ranchero discovered a half-buried spur on the side of a hill. Ornate and unusual, he took the prize back to his barn and proudly hung it on a nail. Decades passed. In the 1960’s our estate had become a longhorn cattle ranch. One day a farrier came to ply his trade. He noticed the spur hanging in the barn, and eyes returned to it many times before he was done shoeing.

When work was through, he made the proprietor an offer. “I’ll shoe your horse for free,” the farrier pointed, “for that old spur on the wall.”

“I don’t think so,” the rancher politely refused. “That spur’s always hung there.”

When the farrier returned a month or so later, he saw the spur again and upped the previous offer: “I’ll shoe every horse on the ranch for that spur.”

The rancher took a moment longer, but refused again. Now he was curious. The spur was later appraised in Santa Fe and turned out to be from the 16th century—a solid-silver war spur from the foot an affluent Conquistador. The relic was donated to the New Mexico History Museum, and ever since our ranch has been known as “The Spur Ranch” at the bottom of Spur Ranch Road.