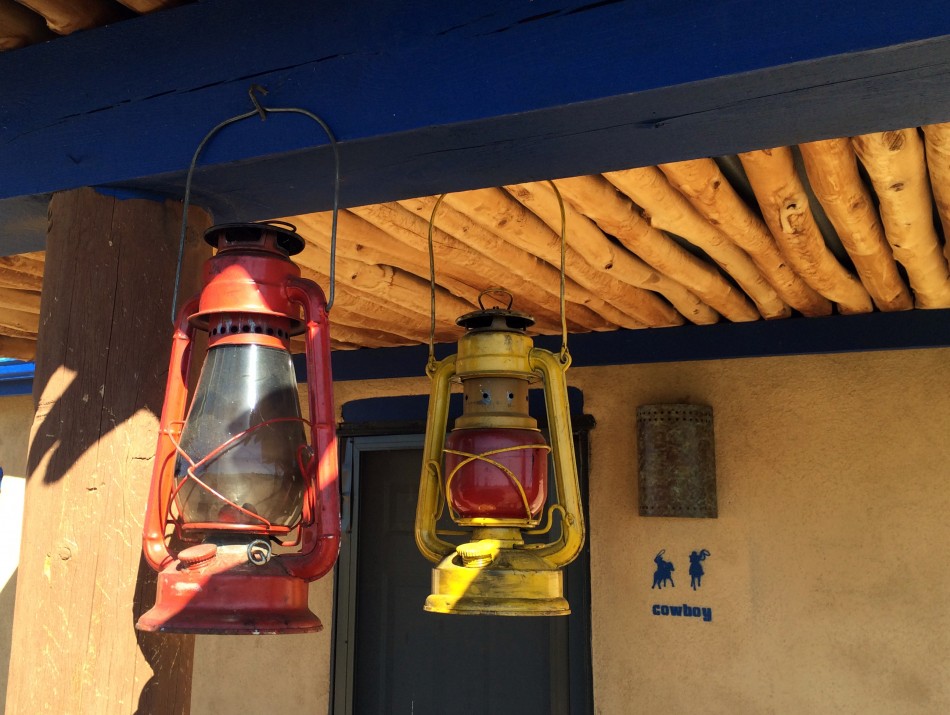 This rustic wood and adobe casita is cozy and clean with room to spread out.  A queen bed and ample closet space appoint the bedroom and the over-sized living room has a fold-out sofa that can sleep two more. The eat-in kitchen seats four around an oak table and is equipped with a stove, microwave, dishwasher, coffeemaker and full-size refrigerator. There is one large bathroom with two sinks, extra counter-space and a large shower. Enjoy spectacular sunsets off the front portal. (images below)

“From beginning to end, this place wasn’t like any place I’ve ever stayed. I was coming into town for special training and just looking for a good deal. I chose Spur Ranch because the rates were a lot lower than the downtown hotels. I was concerned at first about the commute, but it really only took 15 minutes to drive there from Santa Fe. That was a plus.

“The casita wasn’t showy, but it was comfortable. There’s large sculptures dotting the landscape. The views of 4+ mountain ranges were really epic, especially sunset and twilight. At night I heard almost too many coyotes singing which was exciting and a little nerve-wracking at the same time. The one day I didn’t have to go into town I stuck around and there were some interesting goings on. I wandered past the friendly donkey pen and down to the art compound. There were artists blowing and slumping glass who let me watch and answered my questions. I didn’t feel like an intruder. I met Jeff, one of the owners. He was fresh off the plane from performing music in Africa with Cameo! Like “Word Up” Cameo. Crazy right? He’s been all over the world and had tons of great stories. There were a couple of guys working a bobcat and pulling weeds who let me try out my terrible Spanish. They ended up convincing me to help them move a big tank to the back of the property. We chained it up and they used the bobcat to haul it around to the back. I’ve never been put to work at a hotel before. I got my hands and shirt dirty, but it was kind of fun and I made some friends.

“Other people came and went. A young singer met with Jeff and I could hear them rehearsing across from where I was staying. I met an architect lady who was working on converting the stables into a gallery and studios. The other lodger had been there for a month and was using the metalworking shop to make these flower-looking landscapey thingies.

“I know this review is kind of long, but I guess that’s the point I was trying to make. It’s not a bed and breakfast. You’re kind of on your own with plenty of privacy. It’s quiet at night, but it’s a creative community during the day with a lot of different things going on. I’m definitely going to come back this fall when I have my next round trainings in Santa Fe.”
—March 2015